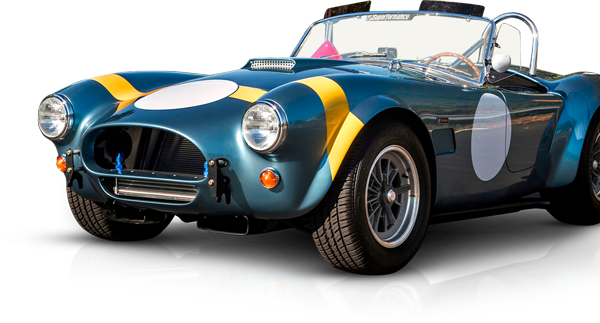 Designed to emulate the great Cobra 289 race cars from that nostalgic golden era of racing in the 1960s, the Superformance MKII FIA is the first licensed continuation of the original AC-derived 289 Cobra that first appeared in 1962, winning 5 races. Loyal to the original lines and proper nostalgic characteristics of the original 1962 Cobra FIA, this car is built for the heart-racing 289 motor and a more modern Tremec TKO transmission. The MKII FIA can be tracked or street driven.

Unlike most competitors, the MKII FIA is built on the successful Tojeiro-styled round tube chassis and features an authentic transverse leaf spring suspension to give owners an exceptionally authentic driving experience. Through our exclusive agreement with Carroll Shelby, the MKII FIA is a licensed Shelby. 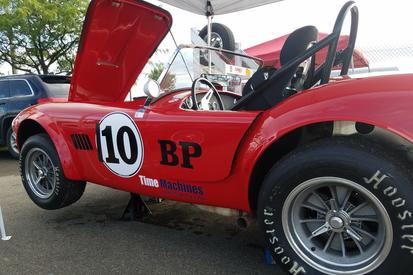 If you are interested in racing your MK II FIA, Time Machines Motorsports has the experience you need to guide you through the correct options and performance improvements necessary to let you race competitively AND meet proper specifications for your race group.
Contact Us

To truly replicate the cornering feeling felt by the racers of the day, the chassis had to be as close to the original as possible. Unlike other manufacturers, the engineers of the Superformance MKII FIA have resisted the urge to make the ride “better” by fitting a reinforced chassis or unequal length control arms with coil-over shocks. Instead, only small functional changes were made for safety or practicality purposes. In fact, the original AC drawings of the chassis, springs, shocks and body dimensions were used to form the necessary jigs.

The 3” pipes have been TIG and MIG welded with computer assistance to guarantee a safer and stronger chassis than the arc and gas welded originals. The chassis is just about as close to the original as possible in this modern day. Building the cars with a meticulous eye on authenticity took time, but in the end, we feel that effort pays off in a superior driving experience for customers.

Just like with the chassis, the same rule applied with the suspension development – it had to be period correct, or as close to it as possible. While the original used a transverse leaf spring style suspension, that arrangement requires different length springs to change camber settings. Because of that, the decision was made to go with heim joints, just like some of the original competition cars used. In fact, two options are offered here – The first being rose joints and the second being adjustable rod ends for a slightly less harsh ride.

Another change for safety was to add an additional pick-up point to the chassis in order to increase the shear strength of the bolt passing through the lower control arm rose joint or rod end. The original springs were made of thinner steel than that available today, so the engineers milled the modern units to the correct size and thickness. This insistence on authenticity means that owners of a Superformance MKII FIA will have virtually the same driving experience as those original racers from the ’60s.

The Superformance MKII FIA bodywork replicates the European FIA regulated form but is here produced in fiberglass. While every one of the FIA cars differed in some small way from the others, one of the identifying characteristics were the different colored stripes painted across the fenders and hood of the Team Shelby cars.

The Superformance MKII FIA features the larger Le Mans type fuel filler placed almost directly behind the passenger’s seat to enable easier pit refilling. Just like the originals, cars may also be fitted with a small wind deflecting shield to prevent fuel being sucked out and into the car at speed.

More fuel was required in the endurance-racing FIA cars, so a special long-range fuel cell was fitted in the trunk. Because the FIA required there be enough room in the trunk for a regulation size suitcase as well, two dimples had to be “engineered” into the boot lid for it to close properly. Legend has it that the first dimples were actually created when the aluminum trunk lid was slammed shut over the luggage by a frustrated mechanic. The reserve fuel switchover valve has been placed on the floor between the driver’s legs just in front of his seat.

The hood of the Superformance MKII FIA also gets special treatment. The rivets that appear on the front of the hood were there to prevent the aluminum from being torn off of its frame at high speed. This was known to happen on the originals, due to the high pressure build-up in the engine compartment. The fender air vents helped to alleviate that problem and to remove excess heat from the engine compartment as well. Fiberglass air scoops are also fitted in three locations to feed cold air onto the front and rear brakes as well as into the cabin foot wells.

Because of the use of larger tires on the FIA cars, the rear and doors were modified to accommodate them. Cut back doors and a more bulbous rear appeared, and the front fenders were flared even further to cover the larger front tires as well. Oil coolers for both the motor and differential have been fitted. Rondel illuminating lights were fitted on the sides of some of the originals for night racing and are available here as well. A roll bar has also been fitted with a forward angled support tube brace bolted to the chassis in the passenger’s foot well. No carpets were fitted and all other trim was also removed.

Under the hood of the originals resided a race 260 or 289 equipped with Webers. Only the first 75 cars were fitted with the 260 before the switch to the 289. The FIA cars also featured a Harrison radiator expansion tank (sourced from a 1963 Corvette) that was fitted above the transverse spring, and side exhausts that exited at the rear of the doors.

The FIA dash was altered by leveling the two shorter elements on either side of the center stack. This allowed the steering column to be dropped to give a more comfortable racing position as well as making enough space for the 3-3/8″ Stewart Warner tachometer to fit above it. In this position it was more visible to the driver. The rest of the instruments were replaced by the larger 2-5/8″ gauges and arranged differently on the dash. The speedometer, for instance, has been relegated to the passenger side. The bottom of the dash also features an upturned lip for strengthening, which also helps cure cowl shake. Strangely the grab handle remained, possibly to meet the FIA production regulations.